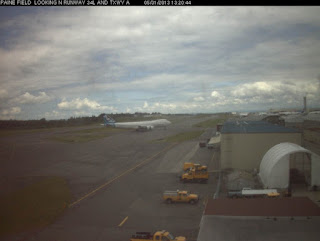 Line 1421 feels like a new plane! Next up, paint. After that, storage or delivery. NCA is scheduled to take three frames towards the end of the year, so I'm guessing they'll take this one, 1469, and 1479. The last three scheduled for assembly should deliver next year. The six orders they have remaining after that, who knows, but probably 2015 and later. 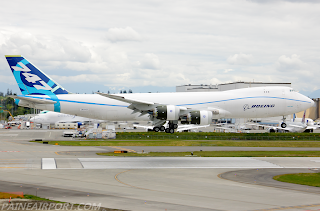 Beautiful pic thanks to Matt Cawby's great blog.
Posted by TurtleLuv at 1:28 PM No comments:

Line 1421 is up in the air, right now, for a test flight. She's the last frame still undergoing a slow refurbishment out of Lackland Airport in San Antonio, Texas (she's been there for a long time now), and it looks like that's finally wrapping up. She'll probably head into paint or back to KPAE soon. JA11KZ (RC521) was the second 747-8 test frame, and is intended for Nippon Cargo.

In other minutia, here's the upcoming Etihad 747-8F route (not really their frame, they're just wet leasing one from Atlas). Quite a route! 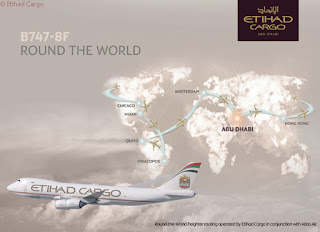 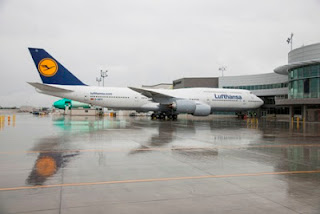 She'll spend a few weeks getting ready at the hands of Lufthansa Technik before she enters service.

There are not many shots of the KPAE flight line getting posted lately, which makes it hard to track activity there. I need to lobby Boeing to set up a high definition remote controlled web cam.
Posted by TurtleLuv at 10:42 PM No comments:

A false alarm from a fire sensor sent one of Nippon Cargo's 747-8Fs, line 1431 (RC523) JA13KZ, into Whitehorse (YXY). Here's a great video of it taking off on a runway which might have bitten off more than it can chew. Thanks to GMPEC from Airliners.net.fr

One of my new favorite things to do as a distraction is track old 744s in storage. It's difficult to catch every movement, because these planes are spread all over the world and many have spotty flight registration using Flight Radar and Flight Aware, but occasionally I catch some activity and do a little investigation.

Today, Cathay B-HKH (line 831), a 22 year old converted freighter, went for a short test flight out of Victorville, where it's been stored for almost a year. This makes me think it's preparing to enter back into service. Cathay has been vocal about their current dislike for converted 744 freighters in the recent economy, but other freight companies are happily operating them and supposedly making money from them (like Evergreen, which has been flying the hell out of recently aquired N779BA, a former Korean Airlines converted freighter). I'm speculating B-HKH will be going into service as a replacement for National Airlines N949CA (line 960), which was involved in a tragic accident last month. We shall see.

Update: Well I guess I was partly wrong. She's flying back to China this morning, mostly empty judging by the distance. Someone over there must have found work for her.
Posted by TurtleLuv at 4:48 PM 1 comment:

In bigger news, line 1435 (RC021) officially kicked off the new 747-8 test program today, going on its first flight since receiving major modifications to enable the tail fuel tank, as well as brand new and improved engines. This is 1435's first flight in over a year. Improvements scheduled to be tested and certified are the tail fuel tank, engine PIPs (with an "up to approximately 2%" fuel burn improvement), and flight computer improvements. All of these changes, plus substantial weight reduction, should coalesce for the first time in line 1492, resulting in an even more efficient 747-8I (and F as well, minus the tail fuel tank as far as I've heard). 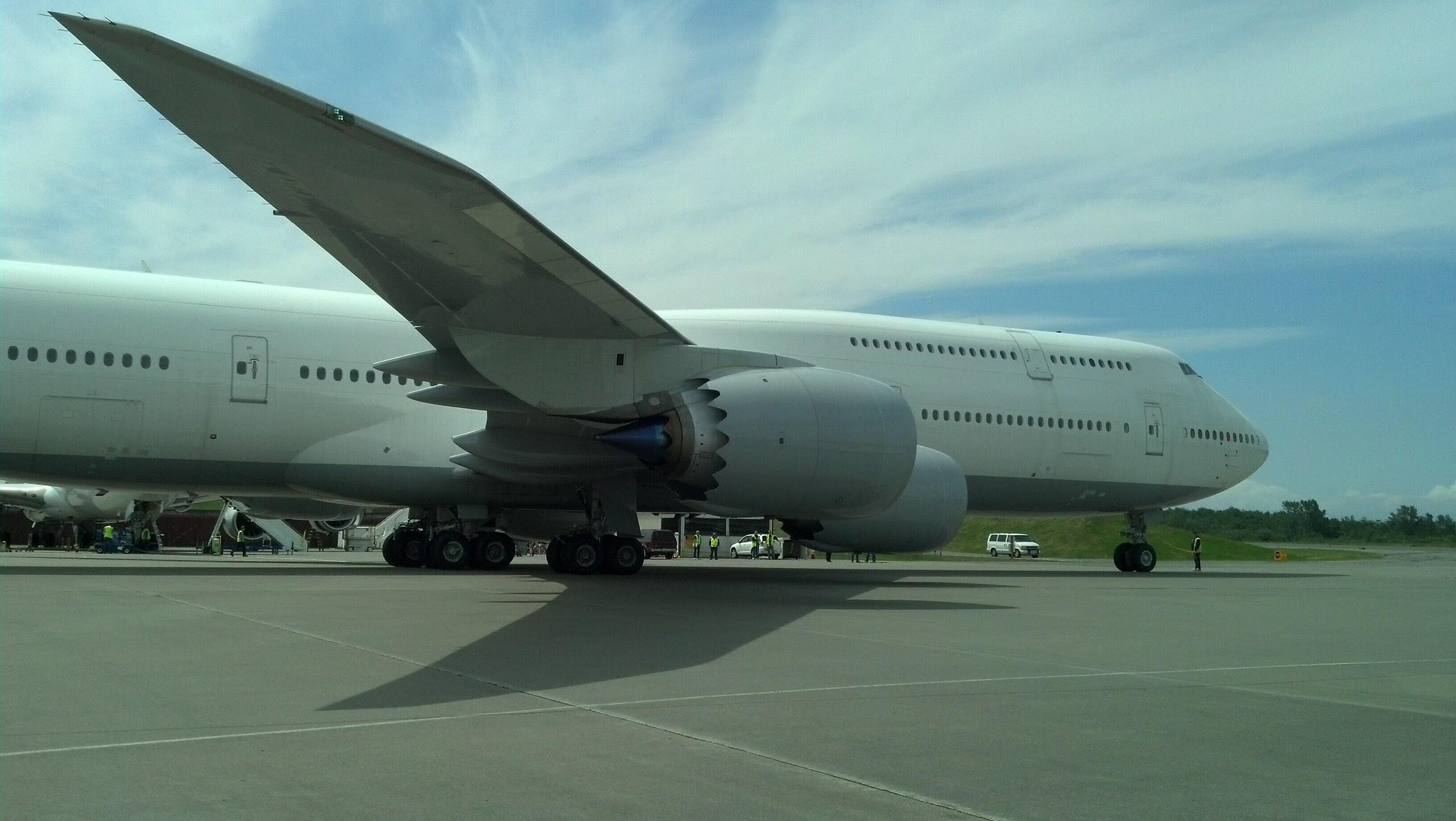 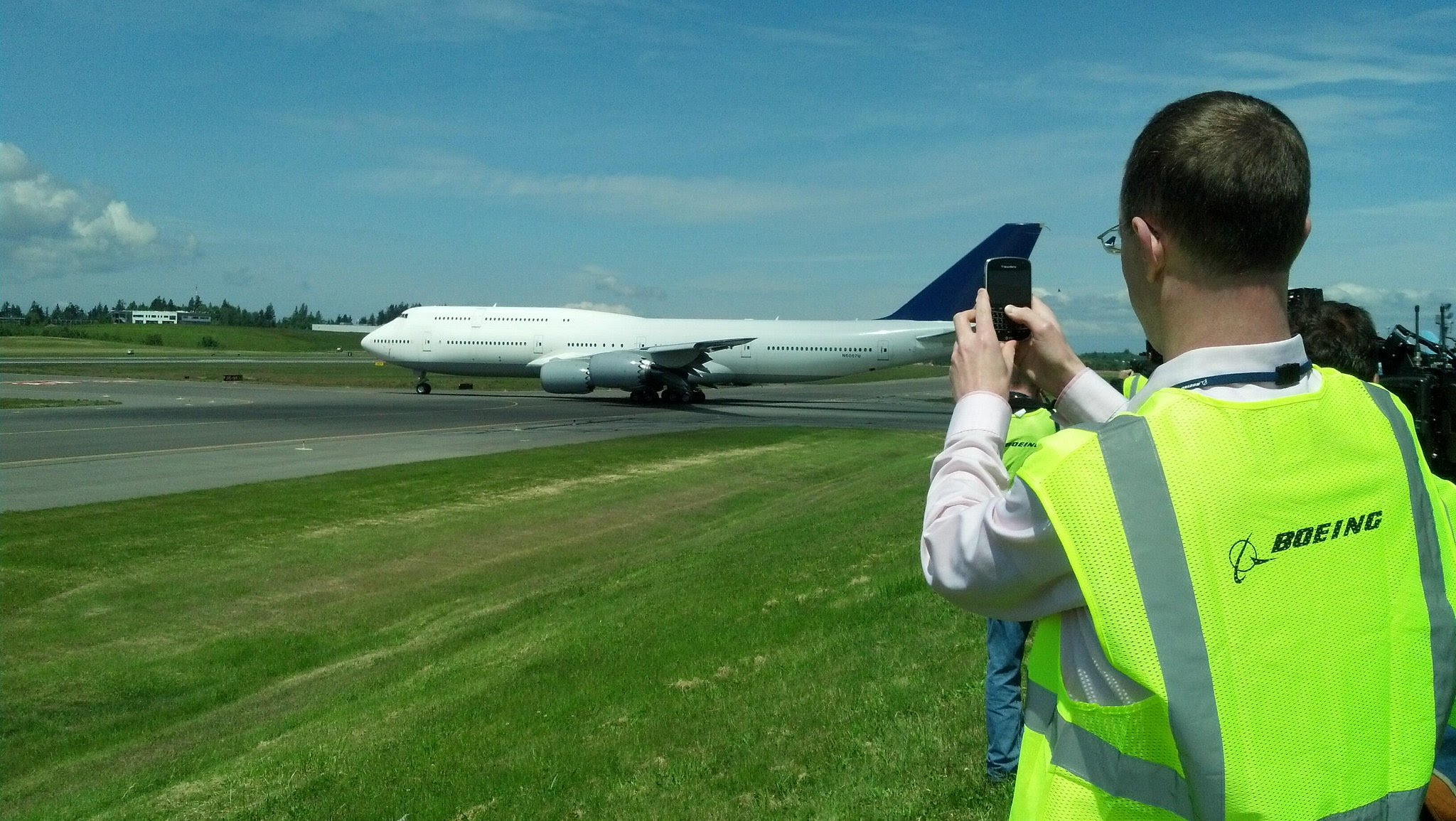 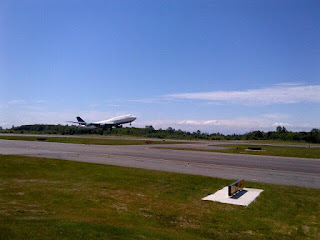 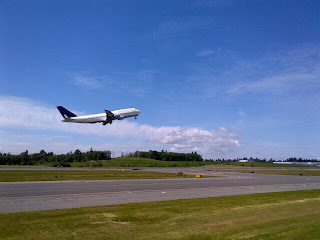 Line 1476 (RC582) N855GT for Atlas delivered yesterday and flew off today. This was the final frame of nine purchased by Atlas, completing their 747-8F order. Of course, originally their order was for twelve, but they rejected three, two of which have been reallocated.
Posted by TurtleLuv at 9:11 PM No comments:

Line 1473 (RC508) LX-VCH for Cargolux (named "City of Dudelange") just delivered, hopping into Seattle for some cargo, and then flying to Luxembourg. This is Cargolux's 8th 747-8F. You can see ANA's next 787, JA818A (line 83), preparing for the first "post battery fiasco" delivery to the left. 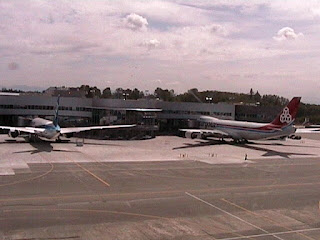 Wednesday, line 1475 (RC028) D-ABYI for Lufthansa flew for the first time. Some great shots from Sabian404. 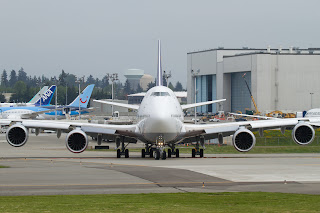 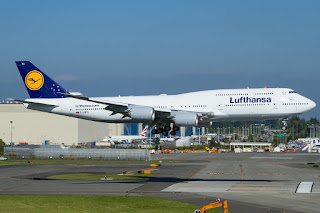 This frame is scheduled to deliver at the end of the month.
Posted by TurtleLuv at 4:38 PM No comments: 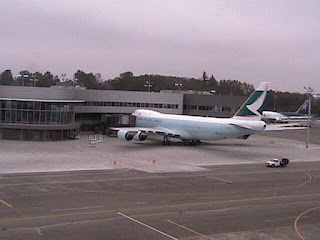 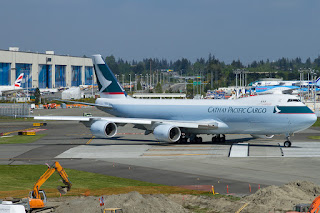 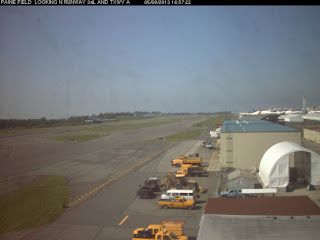 Roll out happened back in early 2011 and she got a paint job that April. 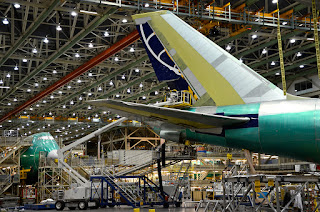 Afterwards, she entered long term storage (with engines) at KPAE which lasted for well over a year. It was curious that previous frames for Cathay (lines 1427 and 1428) and later frames after line 1438 delivered punctually, while 1438 (and 1433) were held back for so long. 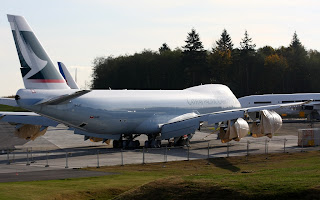 Refurbishment started around July of 2012 and finished up earlier this year. Photo records show she lost her engines sometime post refurbishment, although I don't remember the exact circumstances. 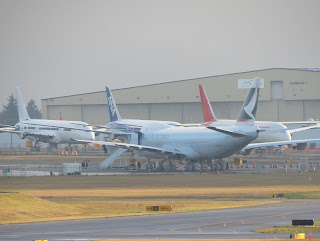 (Edit: When I look at this last picture closely, I think it's actually B-LJC, which never did have engines during storage. That would make more sense.)

Here's to a long and prosperous (albeit delayed) career. Thanks to Matt Cawby for most of the heisted pics.

Posted by TurtleLuv at 4:00 PM No comments:

At least for the time being at KPAE, all 747-8 refurbishment is complete. Cathay line 1433 (RC553) B-LJC was moved over the the 200's isle looking ready to fly. At the same time, line 1435 is at the fuel dock, and looks ready to start flight testing the engine/computer/fuel tank improvements. Of course at some point in the future line 1435 will need to undergo a final refurb, and line 1421 is still under refurb in Texas. But it feels strange having no dormant frames laying around Everett after three years of backlog.

Speaking of dormancy, it looks like more frames are getting deferred, which gives me something else to track entirely. On top of NCA and ABC, Korean Air Cargo is now deferring deliveries until 2014, meaning more brand new frames will fly to the desert and sit. Here's a good rundown. 747-8 news in general has been a bit dire lately, but things will turn around; I've got a feeling.
Posted by TurtleLuv at 1:41 PM 2 comments:

Dubai Aerospace Enterprise cancelled their last five 747-8F's, which was no surprise. They cancelled their first five last year, and the writing was on the wall for the remaining orders. So the count is down to 105 total orders for the 747-8 now, with about 60 of them already built. You can see why Boeing slowed down the line recently.

Etihad Airways is long term leasing a 747-8 from Atlas. I wonder which of Atlas's nine it will be. Apparently it will get a new Etihad paint job. The article says number eight, which if literal, would be line 1471. I'm still hoping it could be line 1437, the last unclaimed Atlas NTU.
Posted by TurtleLuv at 10:39 AM 3 comments: