Back in late February I had to fly to Barcelona, so I seized the opportunity to fly on the 747-8I with Lufthansa. I've flown in a number of 747s before but this was my first trip in the 8I.

The route of the flight was Carlsbad (KCRQ) - Los Angeles (KLAX) - Frankfurt (EDDF) - Barcelona (LEBL). The equipment was:
The Embraer, by the way, was a fun little twenty minute flight. The greatest part of this was the service from a quiet airport ten minutes from my house, with all the perks of connecting. Although, actually connecting at LAX from terminal 8 to the Tom Brady International terminal is extremely inconvenient. It's a looooooooong walk and there's no transportation (other than a $20 taxi around the loop). At least I didn't have to worry about my luggage.

The 747-8I is a 747 through and through. I sat in premium economy, which is nice. It's really what all standard economy seating should be; enough room to be comfortable and retain a little dignity. Lufthansa's interiors are immaculate and modern. The plane itself vibrated a bit on takeoff both times, but other than that was a smooth ride. Very 747 like. Feels like a flying tank. Nothing feels 'widebody' to me like a 747. You can feel the inertia absorb turbulence, turning it into more of a comfortable rumble rather than a disconcerting rattle. The engines are amazingly quiet. I almost missed the racket you usually hear on takeoff. Now it's more of just a calm, firm push back into your seat.

I've talked about it before, but I went into the cabin and talked to the pilot and copilot. You can read about his comments here.

Some pictures, and then full videos of takeoff and descent below: 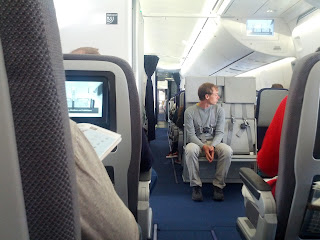 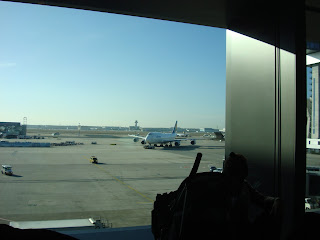 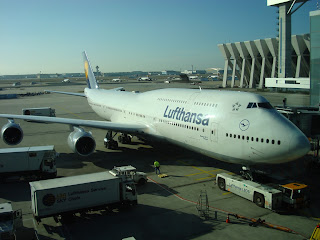 Here is video I took of the departure and the landing coming back from Frankfurt:

I also captured a bit of the return trip departure and arrival on the Brasilia coming home from Los Angeles:

Email ThisBlogThis!Share to TwitterShare to FacebookShare to Pinterest
Labels: 747-8I, Lufthansa, Minutia, United

Now that Air China has all seven airframes (from an initial order of five and a top up of two), it sure would be nice if they decided they want a nice even number of 747-8s, like 10, or 20. At least they're all being used for passenger flight. Early on there were rumors anywhere from two to all of them would be for VIP only.

And on a related note, one of Air China's frames, line 1510 B-2479, is in Germany undergoing a VIP conversion. This plane has been flying in a passenger only config since delivery late last year, including long haul routes to New York and San Francisco, so I postulate this is some sort of swappable conversion, and she'll be able to be used as VIP when needed and a passenger plane the rest of the time. That's the smart way to do VIP.
Posted by TurtleLuv at 10:58 PM 24 comments:

Hot off the presses, Volga-Dnepr Group has signed a Memorandum of Understanding (MOU) to take 20 747-8Fs over the next seven years. Part of this deal includes logistic support from Volga's Antonov-124-100 fleet, which is often seen delivering fuselages and other things to Paine Field. The reason I say "sort of" is because an MOU is just the first step in a long process of getting orders firmed up.

Read about it here.

This is about three 747s a year through 2022. If Boeing can sign a few more airlines, like Cargolux, to similar deals, they very well could keep the 747 line churning at twelve or so frames a year into the 2020s. Exciting news.
Posted by TurtleLuv at 1:18 AM 4 comments: