The Donald Threatens to Cancel 747-8 Order

President Elect Trump tweeted out a warning to Boeing about the cost of the new Air Force One in development. The most interesting thing about this is confirmation that the order is back down to two 747-8s.
Posted by TurtleLuv at 9:20 AM 2 comments:

UPS and Boeing announced an order for 14 747-8 Freighters today. There's an option for 14 more at a later date.

Well this came from out of the blue!

It's only a 747-400, but check out this great video of United showing off their soon to be retired 747 in San Francisco.

Email ThisBlogThis!Share to TwitterShare to FacebookShare to Pinterest
Labels: 747-400, United

Email ThisBlogThis!Share to TwitterShare to FacebookShare to Pinterest
Labels: 747-8 News

Look at this beautiful !@#$ing plane

I mean look at it! God damn the 748I is a sexy beast. And click this link and bookmark it because this guy is always taking amazing airplane pictures up around KPAE.

This was Korean Airlines' HL7637, line 1529, delivering yesterday, their seventh of ten ordered frames.
Posted by TurtleLuv at 9:33 PM 48 comments:

What is the essence of a building? Well, it must protect you from the elements, keep you warm when it’s cold, cool when it’s hot, and it should tell you something about its age – its place in time. This design has a place in time that is without doubt fixed in the second half of the twentieth century. It exudes confidence, style, technology and friendliness in a way that very few others have managed. Most buildings are specialised, but this one is very specialised indeed. It is a jumbo jet.

With about three thousand square feet of floor space, fifteen lavatories, three kitchens and a capacity for up to 367 guests, this is surely a true building. But at the same time this machine blurs the distinction between technology and building, and what’s more it flies!

It has an extraordinary presence. The tail is higher than a six-storey building.  I suppose it’s the grandeur, the scale; it’s heroic, it’s also pure sculpture – it does not really need to fly, it could sit on the ground, it could be in a museum. I suspect it is one of those icons of the late twentieth century that future generations will still look on in wonder.

The fact that we call this an aeroplane rather than a building – or engineering rather than architecture – is really a historical hangover because for me much of what we have here is genuinely architectural both in its design and its thinking.

Once you are inside there are many parallels with modern buildings. Like many offices it is a fixed shell and a movable interior but there is a certain anticlimax. It is really rather bland in many ways. You could say it is in the international hotel style, which I suppose is appropriate – people come and go, it does not have a great deal of character and it could be almost anywhere.

I am really quite passionate about flying whether it is in tiny aircraft or giant Jumbos like this, which may explain why I protest that most airports are depressingly more and more like shopping centres. You barely see the aircraft and when you do you are inside and the experience of flying is almost anaesthetised with drinks, food and movies. The windows are closed. There is instant music. Almost anything to pretend that you are doing something other than flying, which may be what the interior is all about. Somewhere there is a missed opportunity here. The reason is that unlike the exterior, marketing is largely responsible for the interior of this place. However, tucked away from view, there are glimpses of the real thing.

The surprisingly tiny but ruthlessly functional flight deck is a twinkling beauty and the layout is ergonomically efficient. At a more humdrum level the business class toilets are admirably space-efficient and finely detailed pieces of industrial architecture. Elsewhere there are elegant touches: recessed snag-free handles on all the doors. The galleys have a marvellous ‘American diner-style’, all stainless steel and black plastic that seems sadly orphaned in a place that usually serves pre-cooked food. Of course safety regulations turn some parts into pure art, and in the end it is this exuberance of technology-as-art that uplifts this assembly of parts.

There is, I believe, a common misconception about architecture and design – the belief that if the forces of nature are allowed to create form then that form will be automatically beautiful (the ‘if it looks right it is right’ sort of argument). Personally, I think this is nonsense. There is no doubt that an aircraft is an extreme example, but I cannot believe mere aerodynamics gave this piece of industrial architecture its heroic outer form.

This thing was designed. In fact an engineer, Joseph F Sutter, is credited as the chief designer. It is not decorated, it has style, by that I mean metaphoric elements associated with cultural ideas of speed, efficiency, power, strength, dependability – and yet it is genuinely beautiful. I believe all modern architecture is capable of this intrinsic style and beauty without compromising its function.

These tensions between scale, symbolism and function are purely architectural. Classical and modern buildings often impress by their silhouette alone, but when we get closer they lose that impact and when close enough to touch they can be a real disappointment – let down by shoddy workmanship and bad detailing. Only the greatest bear close inspection. On this basis, the Boeing 747 is a monumental achievement. Awe inspiring in flight, beautiful closer up, and when we reach it, exquisitely detailed.

We don’t make buildings on sites any more, we make pieces in a factory, bring them to the site and put them together which is exactly how this aircraft is made, a series of sub-assemblies, little pieces that come together to make the total aircraft.

This is a sixties aircraft and it first flew in 1969. Its projected life is maybe another thirty years.  We think of buildings as enduring. This aircraft is more enduring that a lot of the sixties buildings which are already coming down. Why are they coming down? Because they cannot respond to change. This aircraft’s shell is enduring – it responds to change. There is a lot to learn from this ‘building’. In one sense you could say it is the ultimate technological building site.

Today Korean Airlines took delivery of line 1531 RC057 HL7638. This is their sixth of ten ordered 747-8Is. Another should deliver in the next month or so.

Taxi test and takeoff sequence below. And you thought I didn't care anymore! 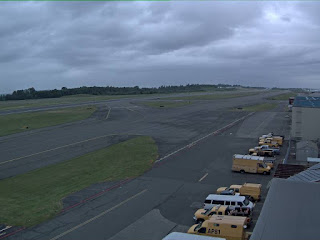 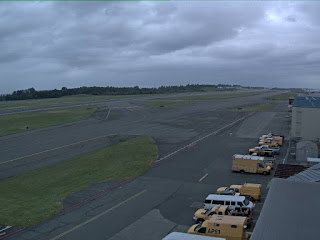 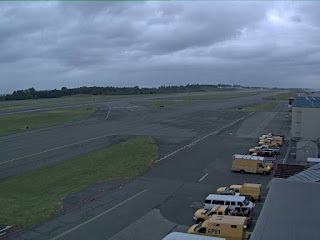 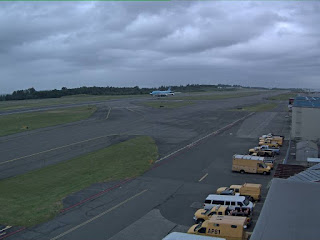 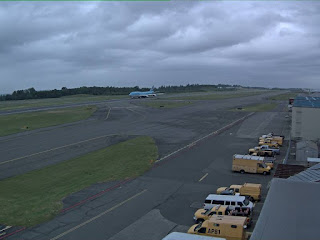 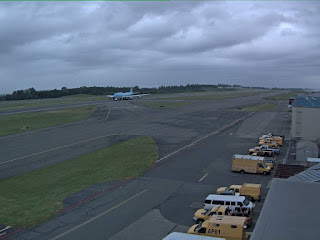 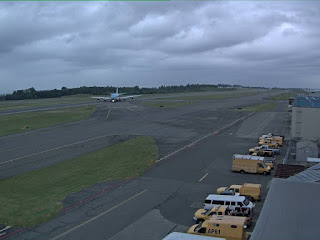 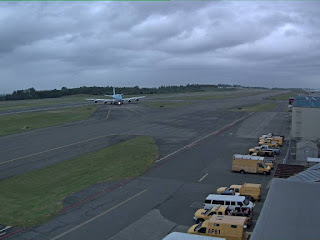 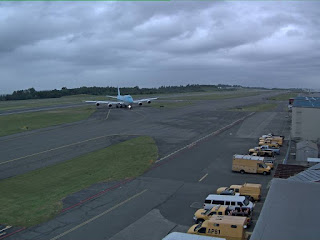 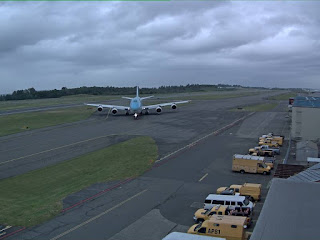 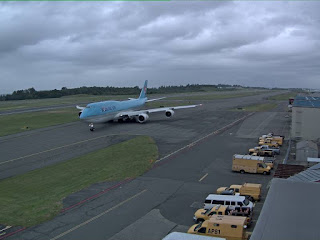 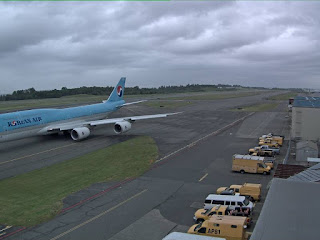 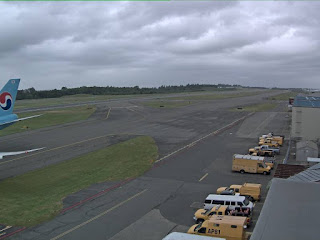 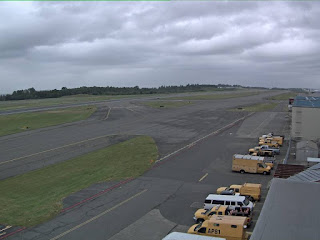 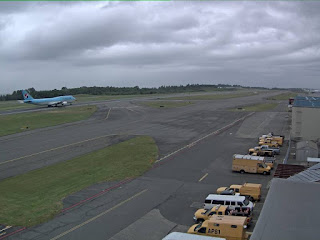 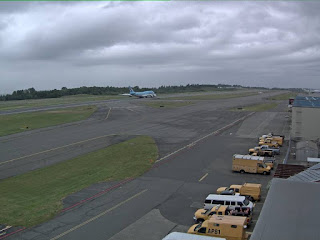 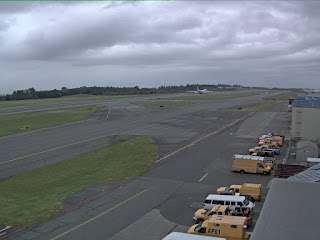 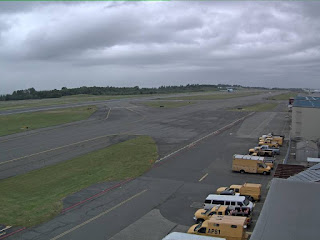 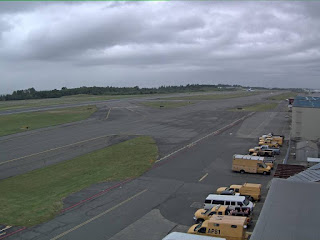 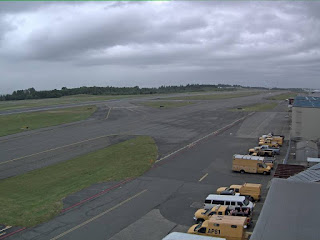 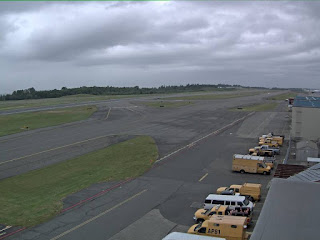 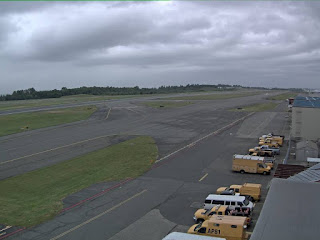 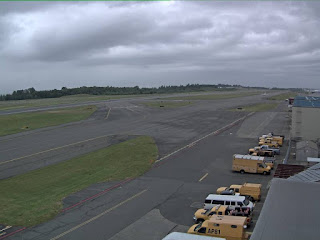 No news is no news.

Trying to cover the 747-8 right now is sort of like trying to cover decaying uranium. Things are slow and there's not much to talk about.

Boeing said last month that the slow down in manufacturing is temporary, and that in 2019 they'll increase the rate once again. But this outlook depends on their slightly biased/myopic predictions about cargo demand, which I have some skepticism over. Meanwhile they're laying off a large group of people in the short term.

Boeing has been shipping 747-8 engines from various sad frames in the desert to install on KPAE airframes due for delivery over the next months, namely Korean Airlines frames. They still have five scheduled to deliver this year. Could this be a sign of engine production issues? Or GE lethargy? This, by the way, doesn't bode well for the short term future of said desert airframes.

Seriously though, this is really not a harbinger of future success for the 747 program, no matter how you look at it. Six planes a year is starting to look like an exit plan to me. I feel bad typing that, and it's especially frustrating with how cheap jet fuel is now.
Posted by TurtleLuv at 11:47 AM 35 comments: